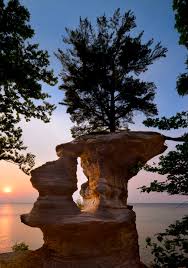 To describe this place in one word: unbelievable

I say unbelievable because I felt as though I was no longer in the Midwest when I was standing on top of a cliff, overlooking Lake Superior.

I can’t imagine how beautiful the boat tour to see the lake shore from the water would be (but I’ll save that for when I can convince my mom to pay).

Referencing the map before I get far enough away that it is a hassle, I ran from Miners Beach, to Mosquito Falls, to Chapel Beach/Rock, then back to Miners Beach.

Now the trail map is a little deceiving, because I only made it to Chapel Rock, which doesn’t appear to be that far away from Miners Beach…

Well you and I were both wrong about that…

That is roughly a 7 mile journey, and it is not an easy one. There is a lot of hidden elevation, plenty of roots, some spots of mud, and the tree coverage isn’t the most kind to the GPS watch (for those Strava junkies).

This blog is going to be more of a story of my run, with a slight rating at the end.

I had left Marquette and traveled to Pictured Rocks for a big run to try to soak up more, in less time. I was overly prepared to take a boat load of photos and soak it all in!

On the way I saw a sign for Miners Falls, and being a sucker for waterfalls, of course I drove down to check it out!

I then walked about 1K down to the falls and loved it, extremely worth checking out!

This, in addition to 2 hikes that morning in Marquette (Sugarloaf Mountain and Dead River Falls) may have been a little much before my monstrosity of a run.

I parked down at Miners Beach which was popping, then took off down the trail that started as sand for about 1K and then went straight to the tree covered, root infested, wonderful trails.

I stopped many times to stand out on the cliffs and snap a photo, or take a video, and then would continue running.

The splits were slow and I was far from worried, I then made it to a fork in the trail with Mosquito Falls to the right or Chapel Beach and Rock straight ahead.

Looking back, adding distance and going to the right toward Mosquito Falls was incorrect for the given situation.

The falls were cool, but many of the trails nearby were not runnable unless you were insane. I then made it to a parking lot, very confused, around 50 minutes of running but probably at least an hour of actual time out there, beginning to sense hunger.

3 miles down the best trail was Chapel Rock, I knew where I was headed!!

In a quest for glory, I split a sub 7 mile and that would be the end of that.

Arriving at Chapel Rock and Chapel Beach I was in awe of how cool that area was.

I was also concerned for my well being as my hunger increased heavily and I had read a sign that said 6.8 miles back to Miners Beach…

A daunting task, what else would I do but jump in Lake Superior, drink some of it to quench my thirst, and pray for a second wind.

After drying off kind of, wiping my feet off, being attacked by bugs, and pulling myself together, I began a race against nothing.

Stopping not only for photos, but people and mud/root spots as well, I had no sense of rhythm.

I tried to get myself to plod forward step by step, looking over the cliffs and thinking a nice cannonball would be awesome, but that I would also die, so I did not attempt any cannonballs.

I passed the fork where I had previously gone to Mosquito Falls and gained some hope knowing I had been there before.

I really tried to put it together and I ran up some stairs, which immediately killed me, and I sat down on a log at the top of those.

Feeling failure, embarrassment, shame, lack of fitness, lack of fuel, I stood up, and walked for a few minutes.

I put it together, one foot in front of the other, knowing I had about 4 miles in front of me.

Strung together a few decent stretches of running before mud, and took some deep breaths to relax myself.

I bonked, but I was coming back into the zone of death, which is much better.

I found the terrible root infested climb immediately after the beach, saw a parking lot that connected to the parking lot I was on, and got the hell off the beach trail.

Absolutely pouring my soul into that final 7:35 I had completed a journey of a lifetime. 16 miles. Out there for about 3.5 hours with everything I had achieved since I left my car.

I poured a packet of Drip Drop into my luke warm Gatorade water bottle which created the world’s greatest watermelon sports drink known to man.

I engulfed some Gatorade Prime Energy chews and a Honey Stinger waffle.

After that, I drove to a closer parking spot, mosied on down to Miners Beach, and laid in Lake Superior like a dead tuna.

Glorious it was, I turned my back to the beach so that people wouldn’t judge me for drinking the lake water, I needed that.

That was the culmination of one hell of a run, and an experience nearly as terrifying as getting lost in a Cabela’s at the age of 4 (great job on that one Gary and Diane).

A combination of people everywhere, roots, mud spots, general confusion, and very long ways no matter how you choose it, I wouldn’t exactly say go and train at Pictured Rocks.

There was some nice shade, and some water all over if you just want to do a fun run and jump in the lake, that could work!

Hiking seems much better and there is a lot I did not explore, however, there are people everywhere and if you are trying to move it along, that isn’t going to happen easily.

In Dave Portnoy Pizza Reviews, he says you can never give something a 10.

That’s why I don’t give Pictured Rocks a 10, however, I would say if you are a Midwest kid, adult, or just a person that enjoys anything outdoors, there is something for you here.

I would do the boat tour to see the rocks from that angle, allowing for some more relaxation and ability to soak it all in!

All in all, visit Pictured Rocks National Lakeshore- PLEASE!

But don’t go out of your way to run at Pictured Rocks, that energy is not worth your time, just go enjoy it!

Now go get you some of that sweet nature!