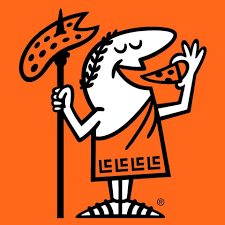 Oliver Hoare and Morgan McDonald (both Australian if you were unaware) also join me in ordering the pizza.

I punch out at the golf course and excitedly move toward picking up the pizza.

Mask on and Lysol spray nearby (safety first) I retrieve the pizza from a drive thru window in Verona. I have never seen a drive thru Little Caesars before. During this I was calling my mother to wish her a Happy Mother’s Day because she is awesome!

(Happy Mother’s Day to all out there!)

I arrive back at the “Track Shack”, A.K.A. “909 O”, A.K.A. “Oakland”. Proudly carrying the pizza’s into the kitchen, the Australian’s and I prepare to feast!

These are two absolute paragons in their respective domains. They symbolize greatness, leadership, populist regimes and imperialism.

Thus, it is only apt for them to adjoin and find common ground.

The result of this? The third-largest pizza chain in the United States, born out of Garden City, Michigan in 1959, now expanded across the globe.

This is Little Caesars.

On a Sunday afternoon when my friend Noah arrived home with three boxes shining in the same colors of the novella/movie “A Clockwise Orange”, I knew that like protagonist Alex, my worldview was about to be changed forever.

My anticipation was replaced by action as I grabbed three plates from the cupboard and we dug in.

I initially opted for two pieces of Deep!Deep! Hawaiian Pizza and one slice of the Deep!Deep! Supreme Pizza.

What first struck me was the crust. Like fluffy pillows, they elucidated comfort and invited me in.As I took my first bite into these cushions, I was blissfully surprised by a sharp crunch. This perfectly cooked combination of soft interior with a crisp exterior is the holy grail that pizza maker’s around the world would strive for, and here I had it in my hands in front of me.

And once I had started I simply could not stop.

Bite by bite my ethereal experience was reaffirmed.

Before I knew it, the three slices that had once stood tall on my plate in front of me were gone, and I was reaching for another slice of Deep!Deep! Supreme.

And I was back. Back where I belonged.

And just like that it was all over. Without warning, I was full. Four slices? Only four slices? Shame and embarrassment laced my experience as I could not make eye contact with my comrades-in-arms as they continued to eat.

We had gone to battle together, and here I was, the first one to bow out. My seeming weakness was on full display.

It was then, at my weakest moment, in-between gasps of strain, I saw him. A white figure in a toga, with a full pizza speared in his right hand, taking a bike out of a slice of pizza hanging from his left hand, enjoying the fruits of his labor. Completely carefree.

This was Caesar. He was talking directly to me. He did not care about my issues, my worries or my insecurities.

No. All he cared about was eating pizza.

And in this moment I finally understood greatness.

And with this newfound strength, as if Caesar himself had inhabited my body and merged with my soul, I reached for another slice of Deep!Deep! Supreme Pizza and begun to eat.

I was back, floating on top of the world. Looking back on this experience, I think that it can only be described as the most intense flow state that I have ever entered. I had energized focus as I achieved my own humble form of neo-colonial conquest.

It was at this point that I blacked out and memory ceases to exist.

It doesn’t matter. None of it matters.

There is only one thing left that matters.

For Little Caesars, you would say, “maybe not so little”, when you look at the DEEP DEEP DEEP! Pizza selection.

Having the meat eater option of it, you know usually what you’re getting. An overload of protein that’ll make you feel like you’ve consumed enough meat for your lifetime.

What I considered a great aspect of the craft in pizza with Little Caesars as like what it was back for the Romans.

The portions were wholesome and the crust was nice, thick and fluffy.

The cheese was solid and so were the toppings.

But like the blood that drained in constant conquering and gladiator arena fights. What we know and are fond of from the Roman Empire and the Caesar’s that came through did not live up to the heritage.

The sauce was lacking the robust flavor and proportion that you look for.

Overall the cheap price and the pizza, what a great experience that was very enjoyable. But was it something that could stand in time like the success the Romans had?

I would have to try more and attend the flavors of my pallet in the glory Rome represented.

Coming from Corunna, Michigan, I firmly stand by the Little Caesars in Corunna is the most elite.

Typically, being the cheapskate that I am DEEP DEEP Dish is not even considered by me. However, I usually order Little Caesars in a large multitude for many people, and to be cost efficient, the basic Hot-N-Ready floats my boat.

Based on comments from others, these are my thoughts:

Little Caesars is not the most quality pizza in the world. It is not bad, it is not cardboard like, this is pizza and I will always eat of it.

The memories connected to Little Caesars pizza are happy ones as my co-host Ben said. Many gatherings have been fueled by Little Caesars and it always provides what we need in quantity!

The opportunity cost (I am an economics major) is out of this world for Little Caesars. $5 for a Hot-N-Ready Pizza where as you may go to Main Street Pizza in Corunna (great pizza) and it costs $8+ just for a plain.

Now the quality of Main Street is certainly better, and I love a local business, so I will always be willing to buy that for smaller groups or their specialty pizzas.

The DEEP DEEP Dish was outstanding however. Frankie Ardelean commented on a Facebook post I made, and he was spot on. There was lots of pizza, squares, thick, similar to Jets Pizza if you are familiar.

The pizza was very filling, I ate about half of it and 2 Crazy Bread sticks (always solid). The thickness of the pizza made it more enjoyable. The sauce was lacking some, I would’ve loved more sauce, but the flavor was ripe. The crust wasn’t the greatest, it had a nice crispness but lacked some of the warm doughiness I am accustomed to, but it wasn’t bad either.

This pizza would’ve been for the middle class, the people not trying to prove their worth by their pizza. This is not for the emperor himself.

The combination of variability, the special cheese in Corunna, the price, the ability to retrieve it at the drop of a hat, the memories, and the fact that this pizza is better than most people say it is in my opinion. While I may not love chain restaurants, I do love that wherever I go (Madison, my cabin, home, on the road, etc.) I can find a Little Caesars waiting for me nearby!