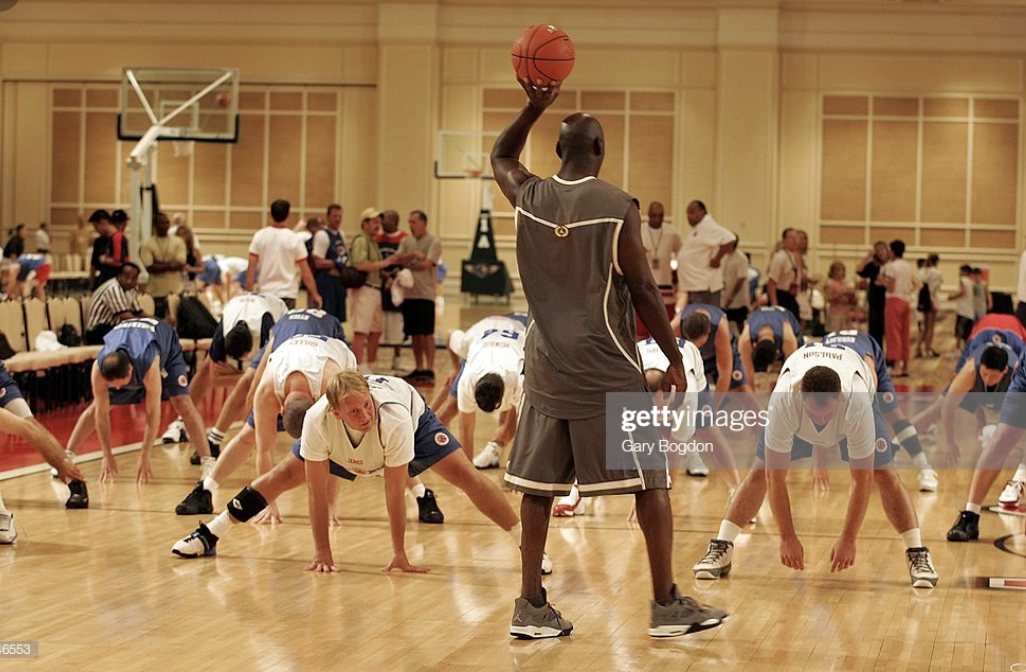 It has started an industry of elite basketball fantasy experiences. Meet Michael. Learn from some of the best active and former coaches in history. NCAA Champ Roy Williams. NBA Champ Doc Rivers. Bob Huggins, Jay Wright, Jim Larranaga, John Thompson, Bill Self and many more. Be taunted at the free throw line by Bill Walton. Meet and compete with an elite group of basketball junkies. The campers are “elite” from their off the court success rather than basketball prowess, but the competition is clean and intense. Eight teams comprised of 9-10 players will make a run for the chance to compete for the championship title on Saturday. And to the victor go the equally coveted spoils: a diamond-studded championship ring inscribed with the Jordan logo, the year, and the winners’ names.
Cost: $15,000 (2010 price)
Location: Mirage Resort Casino, Las Vegas, NV
Must be age 34 or over -basketballfantasycamps.com // Mikefratello.com

Heaven on Earth. That’s the only way to describe this camp. Some people say Madison Square Garden is the MECCA of basketball* and I would tend agree… But it isn’t for four days out of the year. During the annual ‘Jordan Senior Flight School Camp’ the Mirage Resort Casino in Las Vegas becomes the center of the basketball world.

From 1997-2010, the Jordan Senior Flight Club was a basketball fans dream summer camp. Each year 80 males over the age of 34, spent $15,000 and were given the experience of a lifetime and DAMNIT (!) I’m pissed that this no longer exists! Fuck backpacking through Europe* or swimming with the fishes in Hawaii, this is the ultimate dream vacation.

*If “backpacking through Europe” is your dream vacation, you are the absolute WORST! “Dude, you know what would be awesome? Living like a hobo for a week, just so that we can post on our facebook we went backpacking though Europe.” “OMG YES!”

*My dream pair of Air Jordans has always been the Concord 11’s. I actually recently bought a pair of them … well … technically they are fake, but still.

If you wanted, I bet you could sell the goodie basket and recoup the $15,000 you spent on the camp, but the people who attend this camp aren’t like you and me… They don’t sweat over a $6 shot in a bar or the fact that your buddy still owes you $7.50 from the time you bought him pizza. They are high rollers, guys who look at $15,000 the same way we view a $10. The camp is truly a who’s who of Wall Street and Silicon Valley middle-aged white guys. Great accountants, sure. Basketball players, no. But that’s part of what makes this camp so great, they suck, but they are just guys who love basketball and want to live out the dream they had when they were kids.

Another reason why this camp rules and maybe I glossed over this, BUT IT’S VEGAS AND IN A CASINO?! The fact that this camp is in Vegas makes it 10X better. It almost makes this camp to much, I mean, how do you go back to your 9-5 job at the accounting firm in Boise, after playing basketball with Michael Jordan during the day and hitting the streets of Vegas at night? Rumors have it that there is a 5 a.m. curfew for the campers and I can see why, without it I’m not sure there would be enough guys to play 5 on 5 the next day after a night out in Vegas.

Another huge plus of is the 5 star treatment you receive all weekend off the court. You are literally treated like a king: 5 star hotels, breakfast-lunch-dinner buffets with “lobsters the size of basketballs” (ESPN.COM)*, limousine rides everywhere… Even if there wasn’t basketball being played, this still sounds like one hell of a vacation.

*I’ve never understood the infatuation with lobster? Yes, it tastes good. But by the time you put on your bib, crack open your lobster, throw the shell away, and dip it into butter, you realize it’s not worth the work.

The real reason this camp is the best though, is because of the coaching. Just look at the list of coaches who have coached at the camp:

The best part about these coaches’ involvement in the camp is not only are they going to coach the teams (two per team), but they are also going to draft the teams. So, on the the first day of camp, players are put through combine drills and pick-up games, while the coaches walk around with clipboards. Marking down which players they want on their team and which players they wouldn’t for the draft later that night. As someone who has always feared being selected last in pickup games, this makes me nervous just thinking about it.

Can you imagine air-balling a shot in front of Dean Smith? Or jogging back on defense in front of Bob Huggins and then watching them make a note on their clipboard? That’s nightmare fuel.

On the flip side, how awesome would it be to snag an offensive rebound in front of Tom Izzo or take a charge in front of John Thompson? My life would be made.*

*I love the idea of Jim Boheim drafting players based on their length and how well they would do in a 2-3 zone. “Yeah, that guy might have a beer guy, but he has long arms. I’ll take him!”

And that’s only the start of your relationship with these coaches. After the draft, you then have a two practices with your team to learn and your offensive and defensive philosophy. I like to imagine that each of these teams run offenses/defenses similar to what their schools run. Roy Williams team would be known for 3 point shooting and an up-tempo style, Bob Huggins’ for pressure and toughness, and Dean Smith’s team would run his patented 4-corner offense.* I don’t think this is how the camp is run, but one can dream.

Well, now that I have you in a rabbit hole, this is another tear jerker and why I absolutely love Roy Williams:

Even if you don’t receive top notch coaching from these guys (everything I have read says they take it very serious and compete against their fellow coaches), I would still love to have the opportunity to just sit and watch a game with them and pick their brain.*

*I feel like me and Rick Majerus would be best friends. I like to picture me and him just sitting on the bench cracking wise. Yes, I would be on the bench.

At the end of camp, one team is crowned champion and fitted for rings. The company that makes the rings is the same one the San-Antonio Spurs use, simply put, these things are legit.

But before the camp ends, each camper is given the opportunity to try and beat Jordan in a game of one-on-one. Most players don’t even dare challenge MJ and usually he will only have about 15 of the campers play him per year. Fucking pussies. How do you pass up the opportunity to score on MJ?! Imagine if somehow, someway you scored on him? PUT THAT ON MY TOMBSTONE!*

*What would be your strategy to score on MJ? I think mine would be to jab to the left and then sprint/dribble to the right corner and throw up a fadeaway three… And just pray he doesn’t send my shot to the third row.

The camp ends with a quick speech from Jordan (he surprisingly is at the camp everyday and puts the campers through stretches everyday) and a photoshoot with Charles Barkley, Scottie Pippen, and more, before the campers/teammates must go their separate ways… On the precipice of what is about to be the ULTIMATE SUNDAY SCARY.*

*I almost forgot, as you might expect their are a lot of injuries at this camp, but have no fear if you get injured at the camp, you get to attend next year’s camp for free! Oh, and they also have NBA trainers working around the clock at the camp. I can only imagine what some of those conversations are like: “Hey trainer, yeah, so I’m starting to get heartburn from our night out in Vegas last night.”

Much to my dismay, the Senior Flight School ended in 2010 because “He (MJ) went on to say that Michael had said this past summer that he planned on putting more energy into his Charity Golf Tournament.” (mevsmj.com) … … … Are you shitting me Michael? Fuck charity.*

*Maybe we could start a gofundme to get this camp back running again, that’s my dying wish. Who’s with me?

Made it this far? Enjoy some Michael Jordan highlights:

I’ve always tried to emulate that “back-to-back” dribble, but never could.

I could watch MJ highlights all day… Lebron’s still better.

One thought on “I Just Found Out About Michael Jordan’s ‘Senior Flight School’ And It’s Now #1 On My Bucket List.”