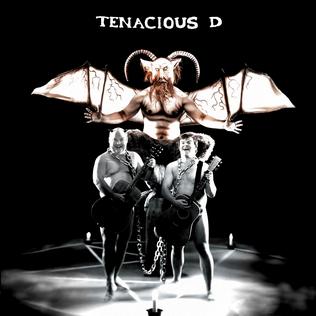 So far we’ve explored a number of duos with a real chemistry and collaborative power when it comes to making music, and while the duo featured today certainly have that they also possess the magic of comedic chemistry. The band featured today, of course, is the comedy-rock duo of Jack Black and Kyle Gass, better known as Tenacious D. The pair did not meet through music or at school like the other duos featured this week, rather, they were both members of The Actors’ Gang, a theater troupe in Los Angeles. Interestingly, the 2 did not initially see eye to eye, but a friendship blossomed when the troupe went on a trip to Scotland. After the trip Black and Gass bonded over their love for music and before long Black started visiting Gass’s apartment where Gass would give guitar lessons in return for Jack in the Box tacos. They would start their songwriting journey by writing a serious song after Jack Black’s girlfriend dumped him. In 1994 Black and Gass performed the debut of “Tribute” (their only real song at the time) at Al’s Bar in LA after which they allowed the crowd to vote for their band name from a series of choices. Allegedly, “Tenacious D” (derived from “tenacious defense” in reference to a phrase used by basketball announcers) did not receive the majority of votes, but they kind of forced it through anyways. After a series of local live performances and brief television appearances, the duo earned a television series simply entitled Tenacious D which ran from 1997-2000. In 2000, Tenacious D signed a record deal with Epic Records and in 2001, 7 years after first performing as Tenacious D, they released their eponymous debut album. That is the subject of today’s blog, and oh boy am I glad to finally have a comedy album in the MTP.

When listening to this album it is easy to focus on the humorous lyrics and skits, but I would like to take a moment to appreciate the quality of the music, because it’s shockingly good. Jack Black, while hamming it up to sell a lot of the jokes and the comedic tone, is a genuinely good singer. The vocal range and control that he possesses allow him to deliver line after line of vocals that are clear and understandable, are appealing to the ear, and elevate the comedy. While of course Jack Black and Kyle Gass contributed to vocals and played instruments throughout the album, the leading men were backed by Dave Grohl (of Nirvana/Foo Fighters) on drums, Page McConnel (of Phish) on keyboard, Warren Fitzgerald (of The Vandals) on guitar, and Steven Shane McDonald (of Red Kross) on bass. This talented group of musicians help bring a level of technical skill to the rough, silly songs which populate this album. Now keep in mind, I’m not saying that this sounds like an album by The Who, so don’t expect musical perfection, but being as funny as it is, there are some musical moments on this album which are shockingly good.

But of course, the real draw of this album is the humor. If you weren’t looking for something funny you wouldn’t spin this album, let’s be honest. The thing about humor is, much like music, everyone has their styles that they like and dislike. I can’t convince you that this album is funny if it doesn’t make you laugh, but the thing about comedy is that I don’t understand the mechanisms of it as well as I understand music, so explaining it might be hard. I can say that much of the humor is absurdist which can be seen clearly in the albums skits which contain a collection of silly interactions between Black and Gass. The duo set a comedic tone in the very first moments of the album though when we hear Black say “Dude, we gotta fucking write something dude. C’mon.” Gass then plays a chord on his guitar only for Jack Black to say “I don’t like that. So far bad, off to a bad start.” Already we get a sense of unprofessionalism which will hold true even through the album’s final 7 minute long song in which Black and Gass become incompetent kings. There is plenty of low brow humor revolving around sex, various toilet humor, and general tomfoolery. I know that I’m stupid and get a real kick out of this album, but I can’t promise you that you’ll enjoy it at all.

Well that’s it for the blog. I’m excited to have an excuse to listen to some comedy music, and this will probably get me on a kick where I revisit songs by the Lonely Island and my favorite Ninja Sex Party albums as well, which I am absolutely here for.

DISCLAIMER: If you don’t enjoy the first 2 songs then turn this album off. If you like those songs, let the whole thing ride, my friend.