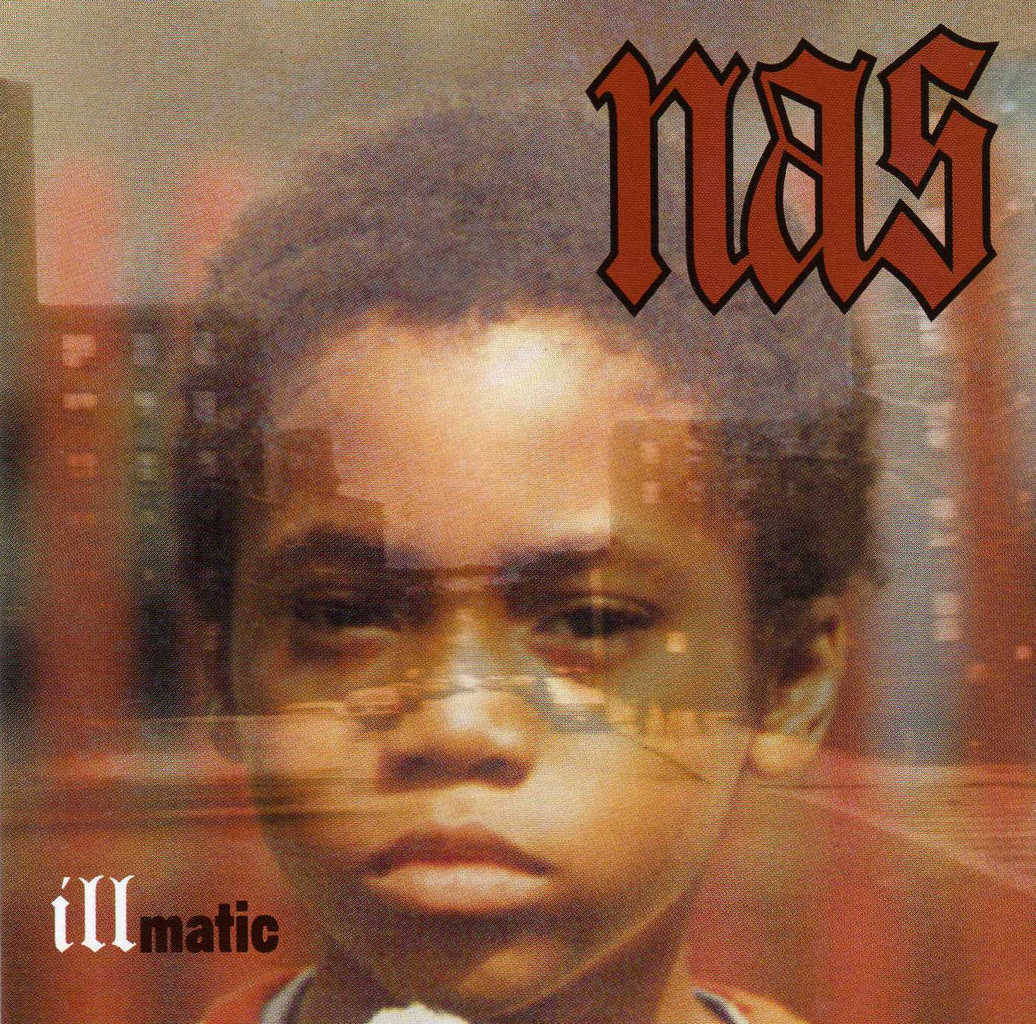 Sometimes an artist really does something special with their debut. It’s not uncommon for debuts to be the best of an artist’s career. It is less common, but given the right moment in musical history a debut album can be the pioneering work of a young genre or advance an existing genre to new heights. It is even more uncommon, but from time to time a debut can capture something so magical that it becomes an object of reverence for fans of its genre. No album, debut or not, however, can quite stack up to the singular hip-hop brilliance that is found on Nas’ debut record Illmatic. Released in 1994 by a then 20 year old Nasir bin Olu Dara Jones, better known as Nas, Illmatic is frequently ranked as one of the greatest rap albums ever released. It is one of the 4 albums of the founding class of Harvard Library’s hip-hop archives. It goes beyond being a quality album and has become revered as a culturally important work of art, a defining moment not only of Nas’ career but hip-hop as a whole, and holds up brilliantly today, 27 years later. And here I am, a white kid from a rural farm community, sitting down to articulate my appreciation of it in a blog.

“What makes this record so special?” you may be asking and the answer, or answers, are probably simpler than you’d expect. For one, it’s timelessness and universality despite its clear time and setting certainly help. Illmatic is a decidedly New York City album, an album that carries its roots through every song and is set in NYC, but is applicable just about anywhere. Sonically, it feels like a 90’s hip-hop album in a way that is hard to put into words, but unlike many old rap records that have aged and now feel rudimentary, Illmatic is still fresh and sharp as ever. Much like a great movie can transcend time and space and live on long past its release, Illmatic manages to go beyond just being a 90’s East Coast hip-hop album without losing its love for music of that very category. Despite its distinctive subject matter focusing on life in inner-city New York I’ve found myself able to enjoy every track on Illmatic listen after listen, hell, I think it helps me understand that world, if only just a little but better.

Illmatic contains the drugs and violence (but not so much the sex) that bogs down many hip-hop records, but, exceptionally, it isn’t any worse for it. The key difference between, say, Snoop Dogg’s Doggystyle and Illmatic is that Nas doesn’t glorify any of it, in fact, he does quite the opposite. Illmatic is any album that doesn’t view its world through rose-tinted glasses, it contains the honest experiences of a brilliant 20 year old growing up in dangerous world. Of course there are admissions of drug use and acknowledgements of violence around them, but instead of claiming any of with pride Nas sees such things as the symptoms of a disease on his community. In the album’s 3rd track “Life’s a Bitch” we hear a commentary on the wealth disparities in America and how it affects people at the bottom before launching into the simple but effective chorus: “Life’s a bitch and then you die// that’s why we get high// because you never know when you’re gonna go.” Stealing is necessary for survival and narcotics become the medicine, or more accurately the painkillers, to treat the diseases that plague the inner-city communities. Nas intentionally paints these drugs as being dangerous and damaging to his community, but admits that “loose cracks produce stacks”. Illmatic isn’t all reflecting somberly on the state of his life and the world around him, no, what really makes Illmatic great is the hope between the lines. Particularly on legendary tracks “The World Is Yours” and “Represent”, Nas stands tall and looks to what could be. He is proud of who he is and where he comes from but sets his sights on a brighter future, not just for himself but for everyone in the inner-city, and for the world as a whole. Illmatic finds the silver lining without being naïve, in fact, its youthful creator is imbued with a wisdom and maturity beyond his years. Forced to grow up early, as many young men and women who grow up in the projects must, Nas’s life experiences, fierce passions, and unique talents come together to form one of the most potent works of hip-hop to date, and one that will always be just as potent as the day it came out.

Part of the timelessness and approachability of this album is thanks to its marvelous selection of instrumentals. The beats on Illmatic have aged very well thanks to their heavy use of pianos and simple compositions. Without listening to any of the lyrics on this album, most people will be able to appreciate the crisp boom-bap drumlines and smooth, flowing keyboards that set the scene for each track. Something has to be said for the production and mixing that have allowed Illmatic to hold up so well while other albums end up feeling dated after barely a decade. Illmatic would be nothing, though, without Nas’s otherworldly lyricism. Song after song Nas delivers some of the greatest verses hip-hop has ever heard. Take the album’s 2nd track, “N.Y. State of Mind”, for instance. Nas lays down pointed and layered interconnected lines filled with wisdom and confidence that all build up to a legendary finale. In the final lines of the song Nas drops a bar saying “I never sleep, ’cause sleep is the cousin of death”, a line that might now be the most referenced quote in all of hip-hop. Most recognize this as being the origin of the “sleep is the cousin of death” phrase that so many rappers have since payed homage to, but the savvy listener might recognize a similarity to a line by another legendary writer.

In what might be the single most legendary soliloquy ever written, Shakespeare’s Hamlet ponders life with the question “To be, or not to be?” Hamlet continues “Whether ’tis nobler in the mind to suffer the slings and arrows of outrageous fortune, or to take arms against a sea of troubles and by opposing to end them. To die- To sleep, no more.” Nas reflects on life similarly but decides that, despite the agony that he must face, that life is worth it. Where he comes from, though, if you get caught sleeping you get left behind or killed. He must stand up and face the grind, but at the end of the day it’s all worth it. Similar wisdom can be found scattered throughout the album, but as impressive as what Nas says is how he says it. Not only are his flows incredible, but they’re very smart containing multitudes of internal rhyme schemes and multisyllabic rhymes that remind one of a prime Biggie Smalls. Some of the wittiest bouts of lyricism can be found in “Memory Lane.” Nas raps, “My man put the battery in my back, a difference from Energizer// Sentence begins indented, with formality// My duration’s infinite, money wise or physiology” and unless you’re really attentively listening you will totally miss all of that. Illmatic doesn’t require intense focus to enjoy, but your attention will undoubtedly be rewarded. Pretty much everything about it works, but the lyrical tour de force that takes center stage is what makes this album so great. I know I brought this up plenty on the Horses blog, but good poetry requires multiple re-reads in order to deeply appreciate it and, yes, this rap album qualifies as poetry in my mind. Luckily, Illmatic is one of the most perfectly, tightly organized rap albums ever coming in only 12 seconds under 40 minutes. It’s an easy listen, a rewarding listen, and one that I, personally, find myself returning to frequently.

Illmatic is sharp, entertaining, thoughtful, and thematically potent as nearly any album out there. Its power comes from the wisdom between the lines, its timelessness, and the cultural impact and influence that it had in the years following its release. I’ve wanted to do this album in the Musical Training Plan for a long time now that I finally did it I feel that I didn’t do it justice. Of course, I never feel like I do any of these albums justice with the blogs I write, but I hope that what I wrote here at least encourages you to listen to Illmatic. Nobody will be able to do Illmatic justice except for Nas himself, so please, go give this album a listen. It is hard to explain, but without this album hip-hop as we know it would be very different, and hopefully after giving it a listen, you’ll understand why.

Thanks for reading, see you next month.