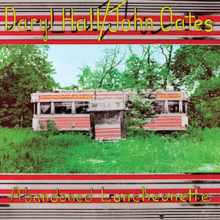 “To write a good song, an artist has to drawn from reality. There has to be some spark from realism that communicates a real feeling to someone else. You have to be real. Or you have to be a really good storyteller.” -Daryll Hall

“The thing is, we’ve changed our style but we’ve never changed the actual roots of what we’ve done.” -John Oates

If you’re familiar at all with popular music on this side of 1970, you’ve probably heard something by Hall and Oates. For a while, the extremely talented duo lived comfortably on the top 40 charts, producing catchy pop singles one after another, but both men have since claimed their 1973 sophomore effort as their favorite project of their careers. This album, today’s selection for the Musical Training Plan, is entitled Abandoned Luncheonette. Unlike many of their later works, Luncheonette was not very successful initially, peaking at 33 on the album charts. However, 29 years following its release, Abandoned Luncheonette was certified platinum, so what’s the deal? Well I wasn’t born until this album was already 27 years old, but from where I’m sitting I can see how a soft-rock album by a relatively unknown duo without a real hit single didn’t do well. With the hindsight of who Hall and Oates would become, though, giving Luncheonette a spin is a real delight, and rest assured, I’ll explain why.

By the mid-late 80’s Hall and Oates had kind of become caricatures of themselves, much like a comedy series that runs too long. They had the chemistry and musical talent to produce hit after hit, but often times those hits were lacking in the soul and substance that ran through the duo’s early work. Going back to the early albums, it isn’t hard to hear the potential that the 2 young men possessed, but what makes Luncheonette so special is that you can almost hear them find themselves. The occasionally folksy, sometimes poppy, always easy to listen to soft-rock that makes up the 36 minutes of this album stands up to almost anything the 2 ever put out without any formulas or pandering. Hall would reflect that he felt as though every note was just right on the first half of this album, and I can really see why. It doesn’t drag or grow repetitive, the rhythms and instrumentation are interesting and fun, and the lyrics are just so good. Luncheonette doesn’t present an overarching narrative, rather, it is a collection of vignettes, mostly about love in some way. Hardly the most original subject matter, but the little details such as the heartbroken ex-lover noticing a toothbrush in “She’s Gone” or the setting of the titular Abandoned Luncheonette give it all a unique feeling. Beyond just being pleasant sonically and interesting lyrically, this album perfectly fits this month’s theme because the songwriting split is almost even. Unlike some of their later works which were mostly lead by Daryll Hall, 4 of the tracks on Luncheonette were written by Hall to Oates’ 3 tracks while the remaining 2 were co-written. Teamwork does make the dreamwork, after all.

As with all music, there’s only so much that I can say about it. I could tell you all day why I think that this album is good, but you just gotta go listen to it. This is an album that all ages will find accessible, and I think most people will find some kind of enjoyment in. I only just discovered this album in the past month while preparing for the MTP, but damn I already love this record. If you’ve never listened to this album, then I hope you fall in love with it too!

I know that these blogs have been short, and yes it is because I am lazy. Or maybe I just would rather leave it short and sweet that drag on when I haven’t got anything much else to say. Bah, whatever, go listen to music now!

Who could be next? Only time will tell…