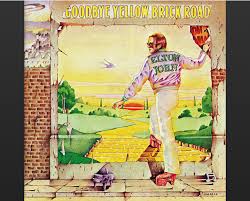 Yeah it counts as pop, leave me alone, jeez.

No but seriously, call Elton John’s 1973 “Goodbye Yellow Brick Road” what you will; call it glam rock, pop rock, glitter, or whatever other arbitrary combination of words that makes you feel comfortable, whatever you call it, it’s still a good album.

Truth be told, “Goodbye Yellow Brick Road” doesn’t really fit into any genre, much like its eccentric creator, the rocket man himself, Elton John. As you may have noticed in only 2 days of albums, however, pop can’t really be defined either. In “Goodbye Yellow Brick Road”, Elton John and longtime songwriter/best buddy Bernie Taupin found some kind of magic, and over the course of 76 minutes display incredible control over a spectrum of genres. From the power of the 11 minute opening track ‘Funeral for a Friend/ Love Lies Bleeding’ which is totally wordless until nearly 6 minutes in, to the elegiac tribute to Marilyn Monroe ‘Candle in the Wind’, then to the well known ‘Bennie and the Jets’, more upbeat tracks like ‘Grey Seal’, pure rock in the form of ‘Saturday Night’s Alright (For Fighting)’, and even a reggae song in ‘Jamaica Jerk-Off’, this record goes all over.

By far the longest album of the week clocking in at a hardy 76 minutes, “Goodbye Yellow Brick Road” does exactly what every good double album does and stays fresh. John and Taupin’s ability to create genuinely engaging and entertaining songs that are entirely different from one another sonically and thematically while still keeping the whole thing together as 1 cohesive piece of work is astonishing. Debatably the greatest artistic achievement of all of the albums this week, “Goodbye Yellow Brick Road” is as much of an adventure as Dorothy’s in “The Wizard of Oz”. The road twists and turns through the heights and depths of human emotion and is a very somber, pulse-pounding, fist pumping, breathtaking, nostalgic, sobering and honest piece of art all at the same time.

The real magic of the album comes from the ability to catch that lighting in a bottle and harness the magic through Bernie Taupin’s always wonderful lyrics and Elton John’s fierce, unforgettable vocals. The instrumentation is great, its all rhythmically fun and diverse, and every piece of the backing track does its job just right, but what makes this album (and every Elton John album) is just that. Elton John was, and is, sensational.

In my opinion the 2nd best album of the week and the best we’ve heard so far (just wait for tomorrow), “Goodbye Yellow Brick Road” is a lot of things. It is sprawling, somehow pretty accessible and fun against all odds, loud at times, soft and sincere at others, and is ultimately just about as close of a musical representation of the man Elton John as you could get. Bottom line, though, “Goodbye Yellow Brick Road” is just a delight.

I really love Elton John, and this is my favorite album of his.