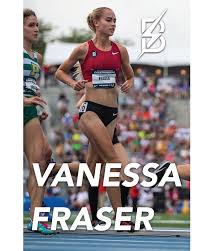 As exciting as Big 10, ACC, SEC, Mountain West and many other conference championships this current weekend, I got my world rocked by the BU races on Thursday night and the Bowerman men and women racing and basically getting beautiful pacing and racing set up just for themselves.

Following their performances either at the UW Husky Invitational or the American Indoor Championships the men and women were ready to roll in the 3K to start the night off. The men were up first.

Paced by Matthew Centrowitz through 1600 meters at 4:06 it was set up to fly. A field filled with other pros, one collegian, and many Bowerman members, was left with Lopez Lomong, Ryan Hill, Evan Jager, Grant Fisher and Sean McGorty were left to make the rest of the race themselves.

Lopez continued to put the hammer down, leading and keeping the pace honest as they wanted to run under 7:40. 400 to go they come through at 6:40, they needed a big 60 to close off of a screaming pace. Lopez continued pushing from the front, but as Ryan Hill tried to pass, it almost inspired Lomong to get stronger with 200 to go. Lopez found some extra gas, and with a few cutting off his teammate moves, crossed the line in 7:37.74 followed by Hill, Jager and then Fisher who was their 4th finisher in 7:39.99.

If this is a showing for Lomong vs Chelimo, I like Chelimo right now. Lopez showed a lot of strength and toughness, but Chelimo was able to make pros look like children at the American championships closing the door so hard he might have broken the lock.

However, the Bowerman crew was very strong for February and they show that come the Olympic Trials in late June, they will be competing, if not filling a majority of the spots on the American Olympic distance team.

Before I get to the women’s race, you have to mention Josh Thompson running 3:34.77 to get the Olympic Trials standard in the 1500 after getting Lopez to pace him through 800 in around 1:55 or 1:56. This after Thompson has a huge Indoor Championships taking down Craig Engels and everyone else in the field. Look for him and Matt Centrowitz this spring and summer to really make some noise.

The main event, the women’s 3K. I apologize for not digging into the women’s 5K but, I did not watch it and I can not give proper details and opinions on how I feel about it other than this: Vanessa Fraser runs a huge 14:48 and she is very cute. Koko also ran 14:30 and holy shnikes that is flying, but she will not be representing America at the Olympics so quite frankly, I care less.

3K, I began watching during my enthralling morning bike ride (inside on a stationary). This was after playing Bloons Tower Defense 6, so naturally I was already very locked in to what was happening. The race is about to start and I was confused as a golfer when it starts raining hard. There only stood 4 women on the starting line.

Kate Grace, Shelby Houlihan, Karissa Schweizer and Colleen Quigley. Grace took the race out as a pacer and went to almost 2K, running the stretch from 1850 to 2000 meters basically in lane 2 as to not get in the way. The women went through a blistering 5:40 through 2K, which was under the clearly stated 8:33 that was Shalanae Flanagan’s American indoor 3000m record.

Houlihan was in the lead after Grace stepped off and the people knew an American record was bound to go down. The announcers were really buttering it up as the other competitors were just there and this was Shelby’s record to receive (which I was not a huge fan of personally).

However the announcers were shocked when Schweizer made a hard move to take the lead around 800 to go. She put the hammer down and continued to lay it all on the track. The announcers just begging for Houlihan to come around as they figured it was only a matter of time before her signature kick would again bury Schweizer. Was this time different though?

Quigley was hanging tough, remaining under 8:30 pace but slowly getting dropped from the 2 women really putting on a clinic in Boston. The laps counted down, Schweizer still pushing, gritting her teeth and going to work, but Houlihan remained behind her. With 1 lap of the 200m track remaining everybody started ti believe that this was not a decided race, but that either woman could be the new American record holder.

They came into the home stretch and Schweizer had a step on her, Houlihan moved wide as to make a push but the jets were not at their full prowess. Schweizer closed in 31.58 off of a scorching pace and ran 8:25.70, what would be equivalent to a sub 9 minute 3200 for any HS male reading this. Houlihan ran 8:26.66 and Quigley although seemed she was out of the race the last few laps, ran 8:28.71 to break the previous American record as well.

My 3K PR is 8:21, so this essentially makes me feel emasculated. Would I even be qualified to pace these women? I hope that you feel that I could, but I am not even 100% that would be something that would fly. These women are ridiculous, going through the mile in 4:32 and closing just as fast or even faster.

In leading up to the Big Ten championships that I will be following every moment of this weekend in support of my teammates and many fellow Big Ten runners that I respect and am curious to see results.